Recently I came to Saperny settlement to photograph the local Culture House to illustrate Saperny article on Wikipedia — the resulting photo is due to be placed at Wikimedia Commons, the Wikipedia's global photobank. You can see the photo in the article, but how surprised I was to see the billboard next to the Culture House! Here it is: 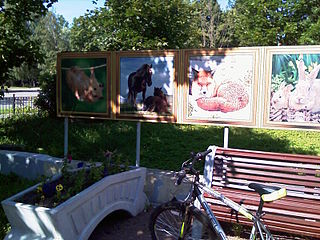 Look at the second picture from the right: with the Horses. It is the Wikimedia Commons Picture Of The Year 2008 contest winner!

According to Creative Commons license, it has to be properly attributed, but nevermind.